Proxmox VE currently uses one of two bootloaders depending on the disk setup selected in the installer.

For EFI Systems installed with ZFS as the root filesystem systemd-boot is used. All other deployments use the standard grub bootloader (this usually also applies to systems which are installed on top of Debian).

Partitioning Scheme Used by the Installer

The Proxmox VE installer creates 3 partitions on all disks selected for installation.

The created partitions are:

Systems using ZFS as root filesystem are booted with a kernel and initrd image stored on the 512 MB EFI System Partition. For legacy BIOS systems, grub is used, for EFI systems systemd-boot is used. Both are installed and configured to point to the ESPs.

proxmox-boot-tool is a utility used to keep the contents of the EFI System Partitions properly configured and synchronized. It copies certain kernel versions to all ESPs and configures the respective bootloader to boot from the vfat formatted ESPs. In the context of ZFS as root filesystem this means that you can use all optional features on your root pool instead of the subset which is also present in the ZFS implementation in grub or having to create a separate small boot-pool
[Booting ZFS on root with grub https://github.com/zfsonlinux/zfs/wiki/Debian-Stretch-Root-on-ZFS]
.

In setups with redundancy all disks are partitioned with an ESP, by the installer. This ensures the system boots even if the first boot device fails or if the BIOS can only boot from a particular disk.

The ESPs are not kept mounted during regular operation. This helps to prevent filesystem corruption to the vfat formatted ESPs in case of a system crash, and removes the need to manually adapt /etc/fstab in case the primary boot device fails.

You can view the currently configured ESPs and their state by running:

Setting up a new partition for use as synced ESP

To format and initialize a partition as synced ESP, e.g., after replacing a failed vdev in an rpool, or when converting an existing system that pre-dates the sync mechanism, proxmox-boot-tool from pve-kernel-helpers can be used.

For example, to format an empty partition /dev/sda2 as ESP, run the following:

To setup an existing, unmounted ESP located on /dev/sda2 for inclusion in Proxmox VE’s kernel update synchronization mechanism, use the following:

Afterwards /etc/kernel/proxmox-boot-uuids should contain a new line with the UUID of the newly added partition. The init command will also automatically trigger a refresh of all configured ESPs.

Updating the configuration on all ESPs

To copy and configure all bootable kernels and keep all ESPs listed in /etc/kernel/proxmox-boot-uuids in sync you just need to run:

(The equivalent to running update-grub systems with ext4 or xfs on root).

This is necessary should you make changes to the kernel commandline, or want to sync all kernels and initrds.

The following kernel versions are configured by default:

Should you wish to add a certain kernel and initrd image to the list of bootable kernels use proxmox-boot-tool kernel add.

For example run the following to add the kernel with ABI version 5.0.15-1-pve to the list of kernels to keep installed and synced to all ESPs:

Run proxmox-boot-tool kernel remove to remove a kernel from the list of manually selected kernels, for example:

Determine which Bootloader is Used 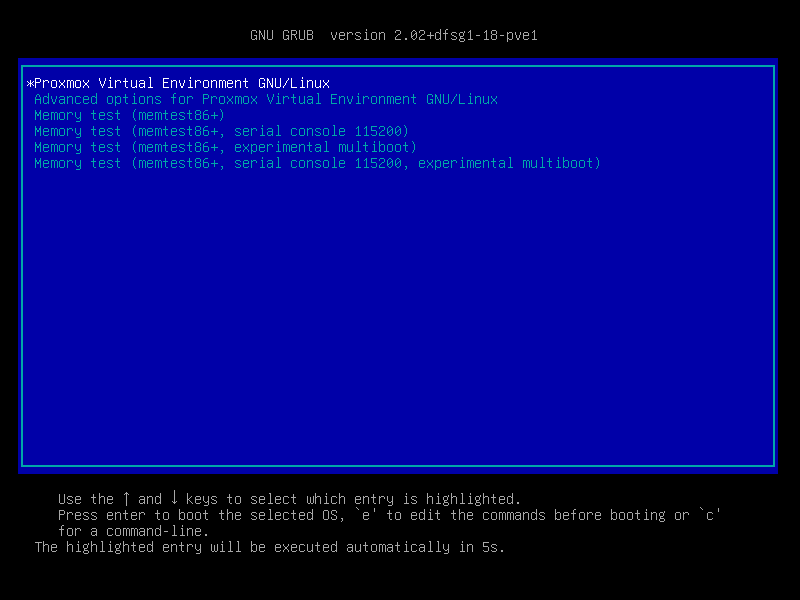 The simplest and most reliable way to determine which bootloader is used, is to watch the boot process of the Proxmox VE node.

You will either see the blue box of grub or the simple black on white systemd-boot. 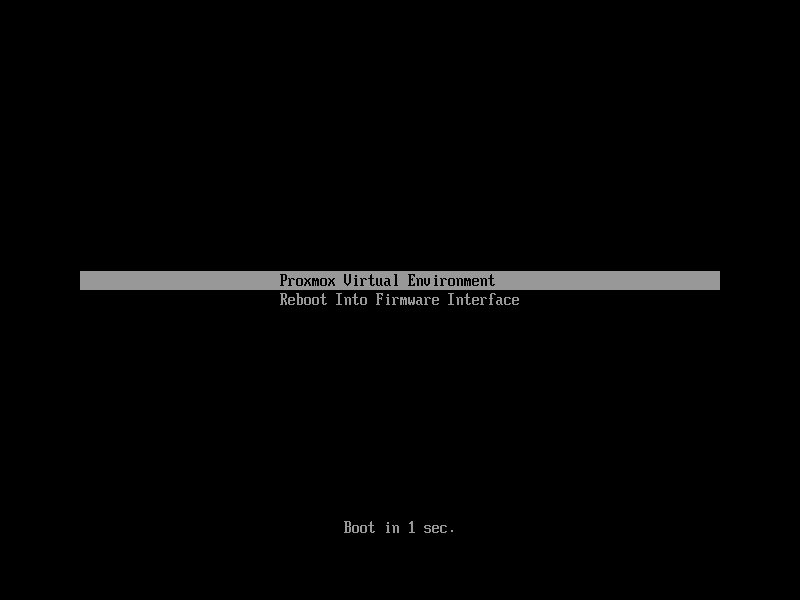 Determining the bootloader from a running system might not be 100% accurate. The safest way is to run the following command:

If it returns a message that EFI variables are not supported, grub is used in BIOS/Legacy mode.

If the output contains a line that looks similar to the following, grub is used in UEFI mode.

If the output contains a line similar to the following, systemd-boot is used.

you can find out if proxmox-boot-tool is configured, which is a good indication of how the system is booted.

grub has been the de-facto standard for booting Linux systems for many years and is quite well documented
[Grub Manual https://www.gnu.org/software/grub/manual/grub/grub.html]
.

systemd-boot is a lightweight EFI bootloader. It reads the kernel and initrd images directly from the EFI Service Partition (ESP) where it is installed. The main advantage of directly loading the kernel from the ESP is that it does not need to reimplement the drivers for accessing the storage. In Proxmox VE proxmox-boot-tool is used to keep the configuration on the ESPs synchronized.

systemd-boot is configured via the file loader/loader.conf in the root directory of an EFI System Partition (ESP). See the loader.conf(5) manpage for details.

An example entry.conf looks like this (/ refers to the root of the ESP):

You can modify the kernel commandline in the following places, depending on the bootloader used:

The kernel commandline needs to be placed in the variable GRUB_CMDLINE_LINUX_DEFAULT in the file /etc/default/grub. Running update-grub appends its content to all linux entries in /boot/grub/grub.cfg.

The kernel commandline needs to be placed as one line in /etc/kernel/cmdline. To apply your changes, run proxmox-boot-tool refresh, which sets it as the option line for all config files in loader/entries/proxmox-*.conf.

Override the Kernel-Version for next Boot

To select a kernel that is not currently the default kernel, you can either:

This should help you work around incompatibilities between a newer kernel version and the hardware.

For example: To permanently select the version 5.15.30-1-pve for booting you would run:

You can also set a kernel version to be booted on the next system boot only. This is for example useful to test if an updated kernel has resolved an issue, which caused you to pin a version in the first place:

To remove any pinned version configuration use the unpin subcommand:

While unpin has a --next-boot option as well, it is used to clear a pinned version set with --next-boot. As that happens already automatically on boot, invonking it manually is of little use.

After setting, or clearing pinned versions you also need to synchronize the content and configuration on the ESPs by running the refresh subcommand.